United Way campaign results are in 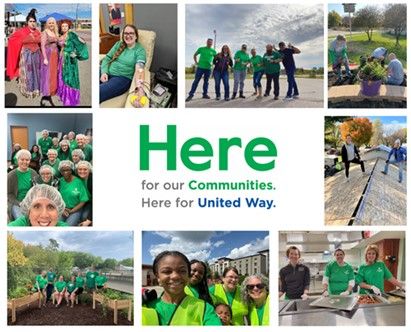 We heard our communities calling during their time of need—and Associated Bank colleagues have answered. Throughout the month of October, colleagues across Associated’s footprint demonstrated they are Here for Our Communities, Here for United Way during the bank’s annual United Way gi​ving campaign.

Thanks to colleagues, this year’s campaign was a great success. Through a combination of colleague contributions, team fundraisers and charitable grants, $770,719 was raised to benefit United Way agencies in our communities.

One of the campaign components was to participate in Days of Caring―where colleagues gave their time and talents to help a variety of organizations and causes―the entire month of October. Nearly 1,700 colleagues volunteered 6,700 hours, providing nearly $198,500 in community service value. (That's 1,600 more hours than last year!)

While the campaign has ended, the impact of colleague pledges, donations and volunteerism will last long into the future.

Thank you to Associated Bank colleagues for your commitment to our communities.