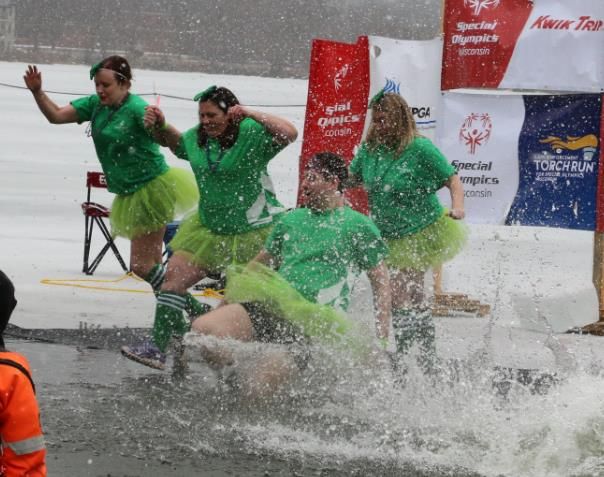 This year’s Polar Plunge was completed by hundreds of Chippewa Valley area participants, including colleagues at Associated Bank who leaped into the icy waters to support the Special Olympics.

Special Olympics Wisconsin (SOWI) is a statewide organization which provides individuals with intellectual disabilities year-round sports training and athletic competition. These individuals are offered continuing opportunities to develop physical fitness; demonstrate courage; and participate in a sharing of gifts, skills and friendship with their families, other Special Olympics athletes and the community. In all they do, Special Olympics strives to awaken the world to the precious abilities and dignity of every human being.

In Chippewa Valley, Associated has been a major sponsor of the Polar Plunge for a number of years. At last year’s plunge, Theresa O’Neel, market manager at the bank, participated in the Toss Your Boss Challenge after her colleagues raised $1,000 for the Special Olympics.

“Though I wasn’t fond of the freezing cold idea at first, I was excited to be a part of the actual jump this year,” said Knudtson. “It was a great experience from raising funds to volunteering and plunging into the ice water. I’d definitely love to do it again!”

“I was also very nervous and scared to jump into the icy waters,” agreed Sarver, “but I’m really glad I decided to participate in the Polar Plunge this year because of all the people this event impacts. Over 1,000 local Special Olympics athletes benefitted from this cause! It was one of the most exciting and best things I’ve ever done.”