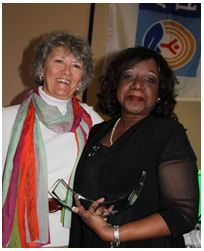 Peters presented Avery with the award and said, “This year’s recipient is a well-respected individual who has a long history with this United Way and throughout the community. 2015 marks 20 years of involvement and contribution to the United Way of Portage County by Lorraine. She is one of only two people to chair the community-wide campaign more than once — chairing both the 1996 and 1997 campaigns. On both occasions, Lorraine surpassed the campaign goal.”

Peters added, “To be very honest, with all of her accomplishments our accolades for Lorraine could go on and on. Simply put, with people like her involved in our organization, we are confident to have continued success. Thank you, Lorraine, for your service to this community.”

Twelve colleagues from the Stevens Point Service Center attended the award presentation. Avery said she was very honored and humbled to receive the award.