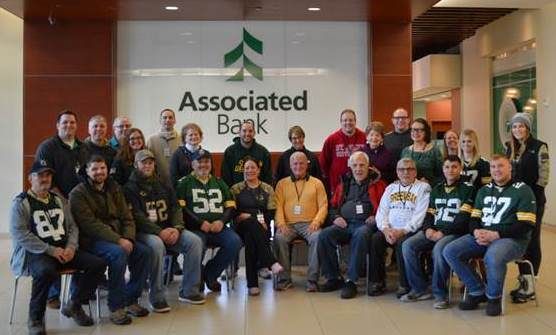 On December 4, the Associated Veterans Network (AVN), a colleague resource group, treated a group of veterans to a Green Bay Packers game at Lambeau Field against the Houston Texans.

Eleven U.S. Army, Marine and Navy veterans — having served in Afghanistan, Bosnia, Korea, and Vietnam — were invited to enjoy a continental breakfast at Associated’s corporate office beforehand where they shared military stories and each received a gift bag filled with Associated Bank and Green Bay Packers collectibles. After, the veterans boarded a bus to Lambeau Field, passing through a line of AVN colleagues thanking them for their services. The guests were then treated to an MVP view of Lambeau Field along with a Packers victory.

One veteran noted how beautiful this experience was while two others realized they were both stationed at the same Navy Patrol Squadron, but years apart. Additionally, one participant who is an Active Duty U.S. Navy member flew in from Washington D.C. to attend this activity.

This is the fifth year that the AVN has hosted this event as a keystone opportunity to reach out to veterans in our communities. Each guest has a personal connection with a member of our Associated Veterans Network who ensured they received five-star hospitality.

The Associated Veterans Network is dedicated to supporting our military colleagues and community members by providing a resource for personal and professional development, and getting involved in programs and activities across Associated Bank’s footprint that support veterans, service members and their families.