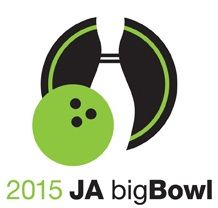 Junior Achievement (JA) of the Upper Midwest has partnered with Associated Bank and its regional employees to conduct a successful JA bigBowl event today at AMF Southtown Lanes.

Approximately 50 Associated employees participated in the event and helped to raise $7,500 to support JA programs in the region. In February, Associated had pledged an additional $10,000 to JA to mark the company’s listing on the New York Stock Exchange.

“Associated Bank has long supported financial education to benefit the communities where we live, work and conduct business,” said Richard.  “It’s clear that students who have the benefit of Junior Achievement are better prepared and more motivated to succeed.”

This is the sixth consecutive year that Associated and JA have partnered to conduct the fund-raising event. During 2014, Associated employees provided nearly 5,000 hours of volunteer community service in Minnesota, including over 50 hours to Junior Achievement.

Richard noted that during 2015, Associated will work with JA organizations to implement a focused financial education initiative across Minnesota, Wisconsin and Illinois.

JA bigBowl is a multi-day event taking place at various bowling establishments throughout the Twin Cities as well as in JA’s other regional locations.