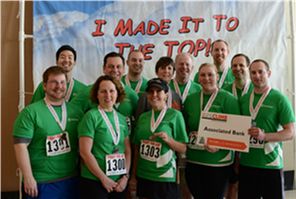 Recently, more than 3,000 Milwaukee residents, including several Associated Bank colleagues, climbed the 1,034 steps of a 42 story building to support the American Lung Association (ALA). Although the building itself is 42 stories tall, the Fight For Air climb actually begins five stories below ground level, totaling 47 stories overall.

Several Milwaukee firms and organizations had teams participate in the event, including Associated. The Associated team consisted of colleagues, former team members, friends and spouses.

Michael Cornell, relationship manager, has been on the ALA – Wisconsin Advisory Board for the past four years and served as the Associated team captain throughout that time. Cornell has been named team captain again this year.

“We have had a team participate in the event for the past four years,” said Cornell. “This is the largest team to date, and the most we have raised for ALA.”

The event raised a goal of $700,000 with Associated colleagues contributing nearly $4,000 for the cause.