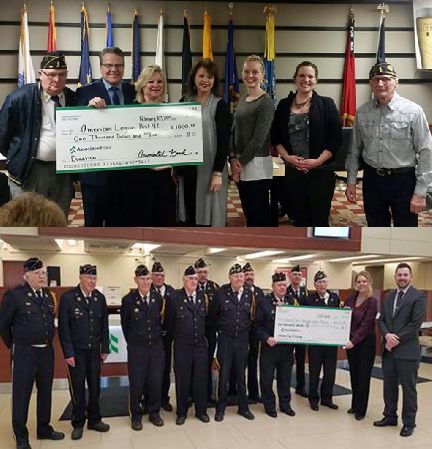 Associated Bank branches across the footprint have been making donations to their local American Legion Post to show support for veterans.

Additionally, the branches showcasing the top displays received a $1,000 donation to their local American Legion Post:

Check presentations were held with the corresponding American Legion Post chapters throughout March and April.

“It was an honor to be able to share the appreciation we have for our veterans, while learning more about the organization and its members,” said district manager Heidi Rausch, Associated Bank, Stevens Point.

This was the fourth year Associated Bank held this event. Associated Bank is committed to supporting veterans and military personnel within our business as well as our communities. View more about our veteran and military benefits at http://careers.associatedbank.com/veteransandinstructions.aspx.