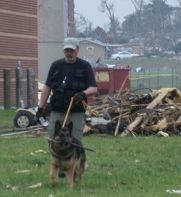 On May 22, a massive EF-5 tornado ripped through the city of 50,000 residents. After the storm, more than 1,300 people were reported missing. According to The Missouri Department of Public Safety, the confirmed death toll was 154 people. With help from Schenk and his dog Beck and other dog and handler teams, everyone reported missing has now been accounted for.

Schenk has worked with a non-profit Illinois-Wisconsin Search and Rescue Dogs group for more than 15 years. Schenk and Beck were among several teams of dogs and handlers from the unit that traveled to Joplin to join the thousands of other volunteers. The team worked 12 to 13 hour days, checking and clearing 15 bodies of water.

Schenk and his dog Beck spent three days in Joplin searching through the rubble, nearby bodies of water, and tornado drop sites. The tornado ripped through one third of the city leaving behind a half-mile by five-mile area of devastation.

"I've never seen anything like this," says Dennis. "Not this massive." Beyond the destruction, Dennis was impressed by something else – the strength of the people in Joplin. "There wasn't a person I came across, that didn't have a positive attitude."

Schenk says Beck did his job well and they were honored to help. "As Americans, we help those in need whether it is in our own backyard or elsewhere."