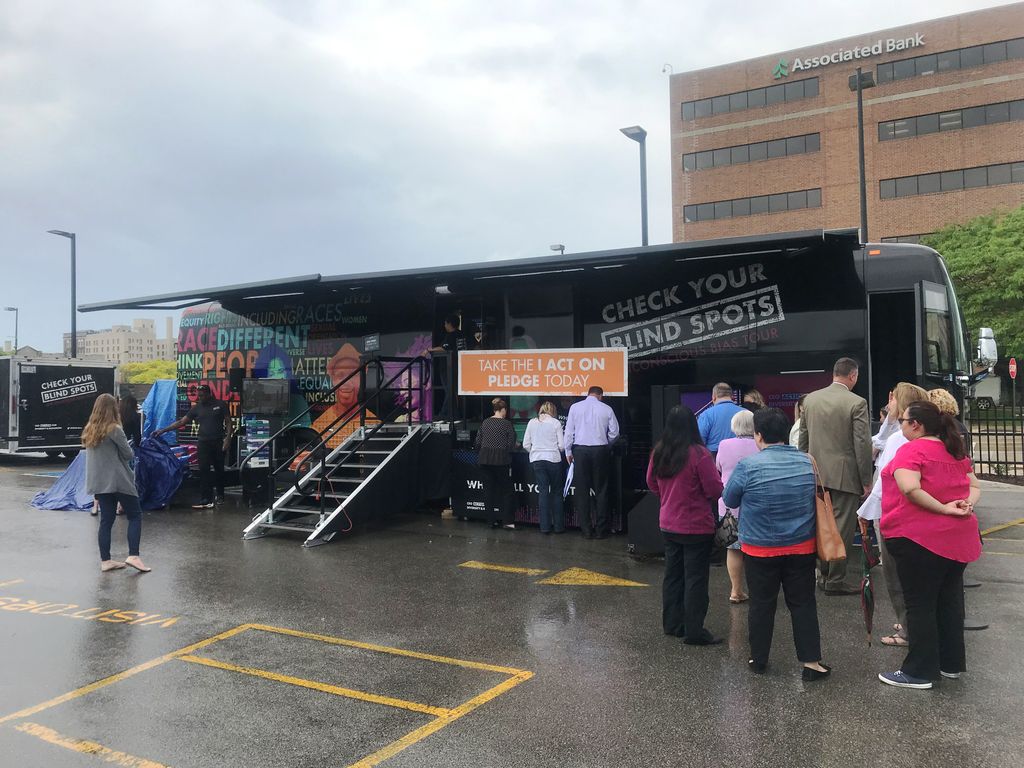 On Tuesday, June 18, Associated Bank hosted the CEO Action Check Your Blind Spots unconscious bias tour to help nearly 150 colleagues and community partners learn more about unconscious biases (or blind spots) that can narrow a person’s vision and potentially influence their behavior. The interactive and eye-opening tour uses virtual reality and gaming technology to show participants that having such blind spots is almost human nature to all. After the experience, participants were invited to join thousands nationwide in committing to address inclusion moving forward by taking the I Act On pledge.

The Check Your Blind Spots tour was created by CEO Action for Diversity & Inclusion™, the largest CEO-driven business commitment to improve diversity and inclusion within the workplace in the country. Associated is a proud signatory of the CEO Action coalition.

Associated is not alone in their commitment to building an inclusive workforce that will also benefit the community. Locally headquartered Schreiber Foods, Kimberly-Clark and Oshkosh Corp. also hosted the bus for their employees. Combined, the four stops welcomed 720 local employees and received nearly 600 I Act On pledge signatures.

“We follow the CEO Action Pledge suggested approach of “Reach One Teach One” to spread awareness around collectively advancing D&I in our communities,” said Ritika Singh, director of diversity and inclusion, Associated Bank. “To support this effort, Associated, along with the Greater Green Bay Chamber of Commerce, Brown County United Way, University of Wisconsin - Green Bay, Northeast Wisconsin Technical College and other regional community partners, serve on a D&I Taskforce to further expand the conversation in our community on how to create inclusive workplaces and communities.”

One Associated colleague commented, “The virtual reality experience was so life like. We learn about biases, but we never get to experience it in this way. It was definitely eye opening to experience bias from another person’s shoes.”

“We are lacking in diversity here (Wisconsin). So this event is impactful and uplifts our D&I goals at Associated Bank,” said another colleague.

Associated was an early signatory of committing to the CEO Action pledge in 2017, the founding year of the pledge. This past February, Associated further launched the I Act On pledge for all colleagues. The pledge states: I pledge to check my bias, speak up for others and step up for all.

Visit WBAY Action 2 News for coverage of the event.