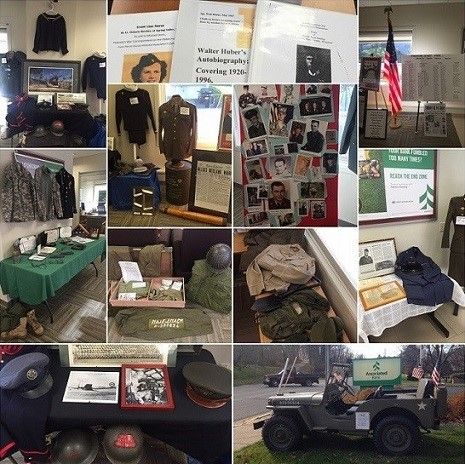 During November, Associated Bank and the Associated Veterans Network (AVN), a colleague resource group that provides a network for military veterans within the company, recognized veterans and military members with memorabilia displays at branches across its footprint.

“The American Legion members were extremely grateful to Associated Bank not only for the monetary donations, but also for the efforts of our colleagues in creating the displays,” said Patrick Derpinghaus, Chief Audit Executive and Executive Sponsor of AVN.

The Ellsworth, Wisconsin branch was selected as the top branch display and received $2,000 to disperse to the local American Legion Post. Earlier last month the branch presented a $1,000 check to both the Kinne-Engelhart Post 204 American Legion and the Pierce County Historical Association. Branch manager, Bobbi Stanley, credits the winning display to a World War II Jeep stationed outside of the branch, as well as World War II memorabilia like uniforms, awards and photos.

The Associated Bank in Peoria, Illinois presented a $1,000 check to William Davies, commander of the Peoria American Legion Post #2, to use for the organization. Last year, the money they received was given to the Illinois Valley Fuller Center for Housing (IVFCH). The IVFCH focuses on helping low income families and veterans with critical home repairs.

In Germantown, Wisconsin, this year’s Associated Bank branch display was made up of items collected by branch employee, Virginia Wrench, who is a military mom. Michael Nardelli, commander of Germantown American Legion Post #1, accepted a $1,000 check from Associated Bank. Nardelli said the donation will be used for The Moving Wall, the nation’s first and only traveling Vietnam Veterans Memorial that will be coming to Germantown this fall. The Wall is a half-size replica of the Washington D.C. Vietnam Veterans Memorial built by Vietnam veterans as a remembrance of lives lost during the war.

Associated Bank’s West Bend, Wisconsin branch was very excited to present their $1,000 check to Lt. Ray Dickop American Legion Post 36 at their monthly meeting in January. The West Bend branch was relocated from Jackson in 2014, and upon the relocation, colleagues at the branch searched for an organization to volunteer for throughout 2015 as a way of giving back to their new community. They decided on their local American Legion, as many of them have family members who served in the military. Colleagues volunteered at several fundraising events, including the American Legion’s food venue at the Washington County Fair handling cash, serving fair goers and preparing food. The group was happy with their efforts, but wanted to give more than just their time. When they heard about the veterans display contest and the potential to win $1,000, they were eager to tell the American Legion, who very generously offered them elegant memorabilia for the display. The branch also invited clients to bring in their own military pictures to be on display for the month of November. The American Legion was thrilled with the final turnout of the display and was thankful that the bank and the community had become so involved in the efforts to help win them a donation. They said the donation will be used for expenses associated with their new building they recently moved into.

The recent check presentation at Associated Bank’s Watertown, Wisconsin branch, was attended by several members of the Watertown American Legion Post who accepted the Bank’s $1,000 donation to their organization. Members of the American Legion expressed their gratitude for the generous donation that they said will help them build their new facility.

Associated Bank’s Hudson, Wisconsin branch location was also a winner of the veterans display contest. John Helgeson, head of the Hudson American Legion, accepted a $1,000 donation at the Bank’s recent check presentation. He said the American Legion will use this for local events, as well as extra emergency funds for local vets that need assistance throughout the year.

Associated Bank’s Rhinelander, Wisconsin branch created their display with the help of the Dahlberg-Makris American Legion Post 7. After receiving the Bank’s $1,000 donation, the American Legion said they will be donating the winnings to Camp American Legion, which provides rest, relaxation, recuperation and rehabilitation to Wisconsin veterans of all ages, active duty military service members and their families. The camp serves those who have a physical or psychological medical condition, any and all types of service and non-service related illnesses, injuries or disabilities.