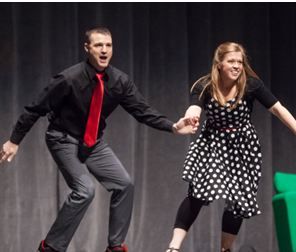 The dancing competition fundraiser benefits the Scenic Bluffs Chapter, which supports the five county areas that surround La Crosse. The competition consisted of 11 local dance teams who compete to take home the coveted mirror ball trophy. The teams were made up of community leaders and led in dancing by dance professionals of the area.

Fundraising activities included: Night at Burracho’s — 20% of the stores sales for the night were donated — and Features in West Salem hosted a celebrity bar tending event and raffle. Local colleagues also contributed a considerable amount of time and money to assist the duet.

“It was a wonderful experience,” says Winiecki. “To see the collective effort of several teams add up to so much really opened my eyes to what can be done in our communities to help others.”

The competition was held at the La Crosse Center and had nearly 2,000 people in attendance. The event raised $165,000 for the Scenic Bluffs Chapter of the American Red Cross — the highest fundraising year in the event’s nine year history.