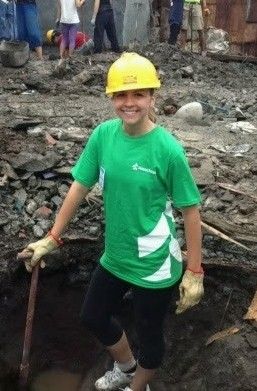 Stephanie Diedrich, public relations intern at Associated Bank, and her classmates, recently traveled to the Philippines for two weeks in conjunction with the Habitat for Humanity Chapter at the University of Wisconsin - Green Bay (UWGB).

Prior to the build, the group of students fundraised $32,000 for housing supplies, along with the cost for their lodging and travel expenses. The majority of the funds were donated directly to Habitat for Humanity Global Village, an international volunteer program. From there, the Philippines chapter of Habitat was able to access the funds and provide the volunteers with the necessary supplies to begin constructing housing units throughout the neighborhood.

The Philippines, along with much of southeastern Asia, was hit by Typhoon Haiyan in November of 2013. The storm was recorded as the strongest tropical cyclone to ever hit and left the area devastated with millions of citizens struggling to clean the aftermath.

"After learning about the opportunity to go on a build trip in the Philippines, I couldn’t pass it up,” Diedrich said. “I heard about the devastation that the recent typhoons have caused to the country and wanted to be part of the rebuild process to provide stable homes for those who lost theirs in this tragedy.”

“I joined a group of ten Green Bay students along with fifteen from Japan to work in Quezon City, Philippines,” Diedrich said. “There, we worked on building a housing unit, similar to an apartment complex, for several families whose homes were destroyed by previous typhoons.”

The students were constructing the foundation of the homes by breaking through concrete and assembling support beams for the building. Diedrich spent much of her day cutting and shaping rebar to be used as the support beams, and mixing cement to pour into the holes for added stability of the structure.

The group spent a week helping with the construction of this housing unit. Each day, the families that would be living in them came out to watch the building process. “It was very impactful seeing and interacting with them — the children were especially fun to play with during my break,” Diedrich said. “The best part about building for Habitat for Humanity is not only knowing that you’re providing a stable home for a family, but actually having the opportunity to meet the people whose lives you’re impacting. It was a more heartwarming experience than I could’ve ever imagined.”

Diedrich said she always likes to remind herself to ‘be the change you want to see in the world.’ “It’s what inspired me to partake in my first build,” she said. “I may not be able to make a difference for everyone, but I know I can make a difference for some; and that is a truly gratifying feeling.”

On November 7-9, Diedrich and UWGB’s Habitat president attended the 2014 Youth Leadership Conference and Young Leaders Summit in North Carolina as a reward. There, Diedrich presented the video and spoke in a panel to over 300 college students who represented Habitat chapters from all over the country.

“I’m so honored to have had this opportunity to share with others the story of my first build experience,” Diedrich said. “It means so much to me that I was able to open the eyes of others to what it’s like living in the aftermath of a natural disaster in a poverty-stricken country."

“My goal with the video was to not only demonstrate the need of affordable housing, but also to show that anyone can help improve the living conditions of others. If this video influenced at least one person to support the causes of Habitat for Humanity, then I believe that is indirectly giving a home to a deserving family somewhere in the world, and that is hugely satisfying.”