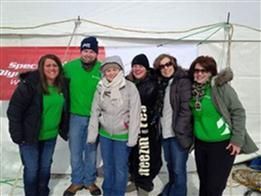 Special Olympics Wisconsin (SOWI) is a statewide organization which provides individuals with intellectual disabilities year-round sports training and athletic competition. In pursuing their mission, the Special Olympics offers these individuals continuing opportunities to develop physical fitness; demonstrate courage; and participate in a sharing of gifts, skills and friendship with their families, other Special Olympics athletes and the community. In all they do, Special Olympics strives to awaken the world to the precious abilities and dignity of every human being.

“I decided to put action to their words,” said O’Neel. “I told them I would plunge if they raised $500.They did that so quickly we decided to up the ante to $1,000 and participate in the official Toss Your Boss Challenge with the Special Olympics.”

When asked if she would consider participating in the polar plunge in the future, O’Neel said, “We will wait and see. Maybe I will get a team of Associated colleagues together next year. Standing on the ice and jumping in all by yourself is very intimidating. I think it would be a lot of fun with a group!”