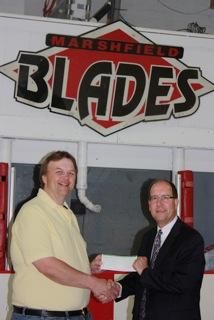 Associated Bank recently acknowledged the efforts of its top 20 volunteers, with a $1,000 grant to the non-profit organization of their choice.

Over the course of four months, these Associated colleagues combined to provide more than 3,000 hours of service to non-profit organizations across Associated's three-state footprint. This select group of colleagues were recognized for accumulating the most volunteer hours among their peers.

"I've been involved in hockey since I was six years old and have stayed involved in coaching and/or refereeing in both Wisconsin and Minnesota since," said Baur. "My deep roots with hockey is why being involved with the Marshfield Youth Hockey Association is so important to me. I enjoy coaching the players not only to teach them good hockey skills and techniques, but also to be good kids on and off the ice by demonstrating sportsmanship and making smart decisions."

Baur will donate his $1,000 grant to the Marshfield Youth Hockey Association's "Learn to Skate" program. The program teaches kids ages four to eight the basics of hockey. The program has been in existence for more than four years and has dramatically increased youth participation for the hockey association.

Other colleagues from throughout Associated have volunteered with several organizations including: Ronald McDonald House and Hamilton Educational Foundation, the Special Olympics, Mit Liebe German Shepherd Dog Rescue, Junior Achievement and Habitat for Humanity.

"Each of our top 20 volunteers have demonstrated incredible passion and dedication for charitable causes through countless hours of service that benefit individuals throughout our communities," said Andrew Ruehl, Vice President, Corporate Social Responsibility Manager. "We are proud to honor each of these colleagues for their tremendous work and thank them for their efforts that ultimately help strengthen our communities. Their enthusiasm for community service is truly an inspiration to all of our colleagues here at Associated."

Associated is committed to giving back to its communities. Hundreds of Associated colleagues live that commitment in their communities throughout the year as volunteers — serving as donors, organizers, leaders, inspirers, and doers.