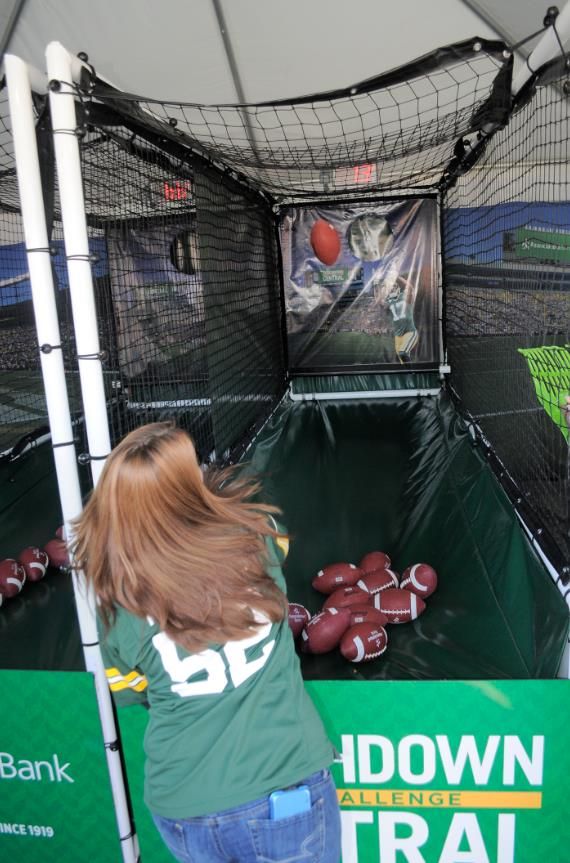 Green Bay, Wis. – September 25, 2015 – Associated Bank, the largest bank headquartered in Wisconsin and bank of the Packers since 1919, has kicked off a unique game-day experience for fans as part of its Touchdown Central fan challenge with Packers star receivers Jordy Nelson, Randall Cobb and Davante Adams.

Fans are invited to visit the Associated Bank interactive zones in both the Fan Walkway and Atrium (only ticketed guests can participate at the Atrium location) at Lambeau Field on all game days. At each fan challenge area, fans can throw a pass to a Jordy Nelson and Randall Cobb simulation and celebrate by striking their own unique touchdown celebration pose. During their touchdown celebration, a photo will be taken with an overlay that includes all three players, and emailed to the fan with social media sharing buttons for immediate posting.

“In celebrating the longevity of our relationship with the Packers, Associated Bank significantly expanded its long-standing Packers partnership in 2014 to include numerous activities for fans, customers and communities throughout Wisconsin,” said Christopher Piotrowski, chief marketing officer, Associated Bank. “This season in partnering with Jordy Nelson, Randall Cobb and Davante Adams, we’re bringing a renewed energy and fresh approach to the Green Bay Packers partnership with an even greater online, in-person and game-day experience through Touchdown Central.”

“Associated Bank and the Packers have been working together as a team for nearly 100 years and the partnership continues to grow with each new season,” said Chad Watson, director of sales & business development with the Packers. “Through our partnership, it is clear that Associated is committed to the team and the community on many levels that includes hospitality, entertainment, promotional and philanthropic elements.”

All fans completing the fan challenge at Lambeau Field will receive a token of appreciation. Fans who open an Associated Packers Checking account additionally receive instant benefits and giveaways.

Fans can also participate in the Touchdown Central sweepstakes online by visiting www.ABTDCentral.com, uploading their touchdown celebration photo, choosing an overlay with star receivers Nelson, Cobb and Davante, and posting to social media with the hashtag #ABTDCentral. The site will be updated each week with new images. The more celebration photos fans post, the more chances they have of winning an autographed, home-game jersey. Associated Bank will donate up to $20,000 to a local nonprofit organization in honor of the player that receives the most downloads.

Another way to participate is to visit any Wisconsin Associated Bank branch, take a photo with a life-size Jordy, Randall or Davante cutout and post to social media with the hashtag #ABTDCentral.

Outside of Wisconsin, fans can visit their branch in Illinois and Minnesota and take touchdown celebration photos with their team colors and post to social media with the same hashtag for a chance to win autographed prizes from well-known alumni players from their state.

Fans are encouraged to engage with Associated’s Touchdown Central all season, as additional partnership touchpoints and promotions will continue to be announced.