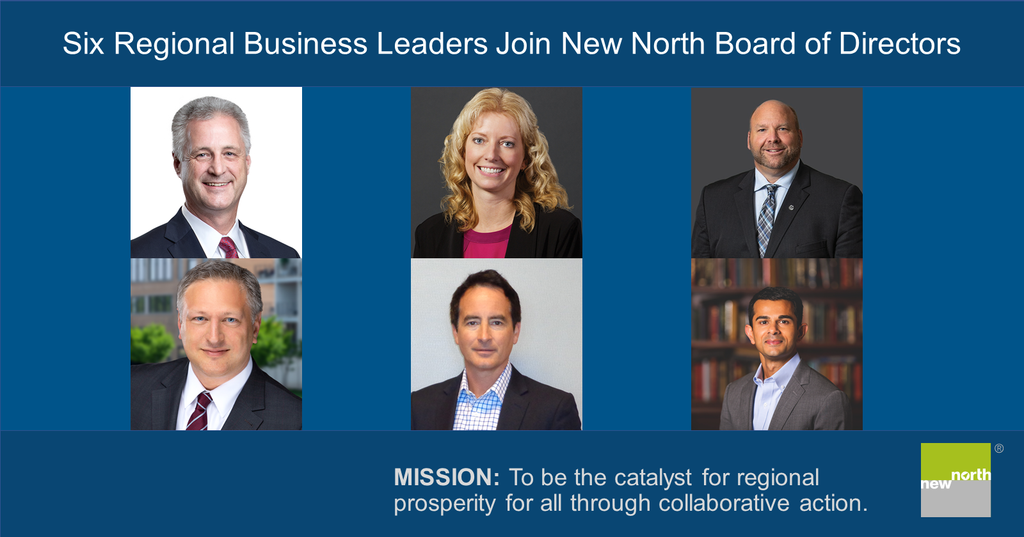 NEW NORTH, January 21, 2021 – Six business leaders from a cross-section of industries – Dave Kievet of The Boldt Company, Nicole Kitowski of Associated Bank, John Krause of Baker Tilly, Chris Pahl of Ruder Ware, Patrick Schillinger of WEC Energy Group and Sachin Shivaram of Wisconsin Aluminum Foundry – have joined the board of directors of New North Inc., the regional economic development corporation for the 18 counties of Northeast Wisconsin.

“We are excited to add the perspective of multiple New North industries,” says Vicki Updike, co-chair of the New North board development committee. “These six thought leaders represent construction, financial services, legal, professional services, energy and manufacturing. We welcome them to the board.”

Dave Kievet is president and COO of The Boldt Company, having been promoted to president in June 2020. He has served Boldt for more than three decades, first joining the company in March 1990. In his current role, Kievet is responsible for providing corporate direction to all operating groups and to 10 specific company offices, including Northeast Wisconsin, Milwaukee, Madison and Chicago. He also oversees Boldt Technical Services. Kievet has spent more than 20 years actively working on the development, implementation and integration of Lean concepts for project delivery on behalf of the company. He also played a role in establishing and expanding Boldt operations within California, Oklahoma and Michigan. Kievet holds a bachelor’s degree in construction management from the University of Wisconsin-Madison.

John Krause is a partner at Baker Tilly, where he specializes in the construction and real estate industries. Krause serves as the firm’s market leader in Northeast Wisconsin, and has been with Baker Tilly since 1990. He possesses extensive experience in financial reporting and analysis, personal and business tax consulting, and succession planning. Krause holds a bachelor’s degree in accounting from the University of Wisconsin Oshkosh.

Chris Pahl is an attorney at the Green Bay office of Ruder Ware. He has spent almost two decades practicing corporate law after beginning his professional career as a certified public accountant. Pahl provides a dollars-and-cents approach to clients in his practice areas: business organizations, mergers and acquisitions, real estate/construction, and commercial collection. He has been with Ruder Ware since June following 14 years with another Northeast Wisconsin law firm. Pahl worked as a CPA at Virchow Krause & Company from 1997-2001. He holds a bachelor’s degree in accounting from the University of Wisconsin-Green Bay and received his law degree from the University of Wisconsin-Madison Law School.

Patrick Schillinger is vice president of state legislative and local affairs for WEC Energy Group. He joined (then) Integrys Energy Group in 2007 as assistant vice president of government relations, and was appointed to his current role when WEC Energy Group was formed in 2015. Schillinger presently oversees the company’s state and local government relations in the Upper Midwest. He previously held positions with the Wisconsin Paper Council and the Greater Green Bay Chamber of Commerce. Schillinger received a bachelor’s degree in political science and government from the University of Wisconsin-Eau Claire, along with a law degree from the University of Wisconsin-Madison Law School.

Sachin Shivaram is CEO of Wisconsin Aluminum Foundry, a Manitowoc-based provider of aluminum- and copper-base alloy castings for multiple industries, including automotive, heavy truck and medical equipment. He relocated to the New North region in 2016 and joined Wisconsin Aluminum Foundry in June 2019. Shivaram previously spent more than a decade in a variety of leadership roles within the industrial manufacturing industry, covering aluminum extrusions, steel and steel pipe, and metallics. He served as president of Samuel Pressure Vessel Group in Marinette, Wis. for two-plus years (2016-18). Shivaram has worked for companies nationwide (Southwest, West Coast and Midwest) and globally (Mexico and Brazil), providing him with a wide-ranging business perspective. He received a bachelor’s degree in history & literature from Harvard University, later earning a law degree from Yale Law School and a master’s degree in political science from the University of Cambridge.