Associated’s Phil Flynn Looks Back on Career, Ahead at Retirement, by Wisconsin Bankers Association 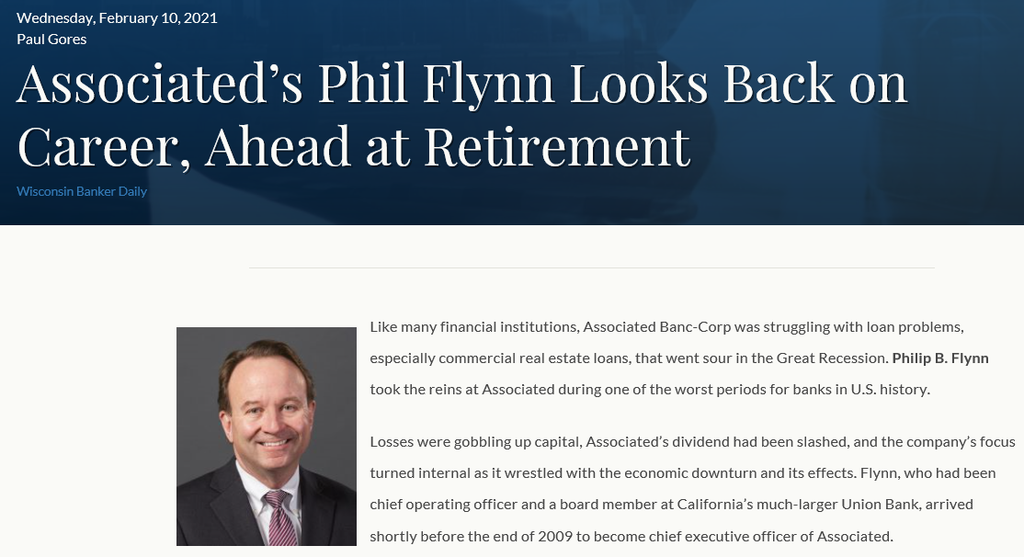 Like many financial institutions, Associated Banc-Corp was struggling with loan problems, especially commercial real estate loans, that went sour in the Great Recession. Philip B. Flynn took the reins at Associated during one of the worst periods for banks in U.S. history.

Losses were gobbling up capital, Associated’s dividend had been slashed, and the company’s focus turned internal as it wrestled with the economic downturn and its effects. Flynn, who had been chief operating officer and a board member at California’s much-larger Union Bank, arrived shortly before the end of 2009 to become chief executive officer of Associated.

His mission from the Associated board of directors was clear: Clean up the mess and return Associated to its position as a strong Wisconsin-based regional bank.

Under Flynn’s direction, Associated not only quickly returned to profitability and raised capital, but over the subsequent years, the bank has updated its technology, modernized its branches, become an acquirer, and doubled its loan book.

Now, more than 11 years since he came to Wisconsin – his marching orders from the board long since fulfilled – Flynn, 63, plans to retire as CEO of Associated. He will stay with the company until the end of 2021 and assist the transition to a new chief executive.

“It turned out to be a very fortuitous and great move,” Flynn said of his decision to leave the mostly sunny West Coast for the often-snowy Midwest. “I’ve really enjoyed being in Wisconsin and leading Associated, helping to right the ship at the end of ‘09 and early in ‘10. It’s been a good run.”

In an interview with the Wisconsin Bankers Association, Flynn took a look in the rear-view mirror at his time with Associated, starting with the task he faced back in December of 2009.

Shortly before he started the job, Associated had been told by regulators to beef up capital, and the bank had no timetable for paying back a $525 million Troubled Asset Relief Program investment from the U.S. government. The company's stock price was down 45% for the year.

Flynn hunkered down with the Associated workforce to perform the hard work that needed to be done and aimed to do it as rapidly as possible. This meant diving deep into the portfolio to get a clear picture of troubled loans and reserving for them, as well as going to Wall Street to try to raise capital.

Associated cleansed its portfolio of bad loans, including too many that had been made outside Associated’s normal market. Associated, which is the parent company of Green Bay-based Associated Bank, posted a $161 million loss for the year as it dealt with bad credits on the books.

Flynn headed to Wall Street to try to generate about $500 million in a stock sale. When the capital raise was a success, Flynn said, he knew the bank was out of the woods.

“That all sounds hard, but I kind of viewed it as sort of project. You figure out what the parameters of the problem are, you recognize them, and then you make sure you can cover those losses by refilling the capital of the company,” Flynn said. “Before the end of January, we had done all that. It took less than two months. And at that point we could really turn our attention to the most important thing we had to do back then, which was re-establish the relationships with our customers that we needed.”

He discovered that Associated had sunk into “a very introspective sort of survival mode in ‘08 and into ‘09,” which meant taking care of customers had slipped down some notches on the priority list.

“That was the difficult thing – to get the culture turned around, to get people to realize the company is going to be fine now, we’re going to remain independent. We’re a survivor, but we’re only going to do well if we go back to being focused on customers,” Flynn said. “That took a little time, but as we sit here now 11-plus years later, our customer experience scores are the highest they’ve ever been, despite COVID.”

Jay Williams, chairman of Associated Banc-Corp, said “the bank was really in a tough spot” before Flynn arrived.

“Phil raised capital, came up with a business plan, put a great team of leaders together and just kept building from that,” Williams said. “He’s always thinking about the colleagues and customers.”

Flynn said the fast turnaround helped Associated get a leg up on some competitors in what still was a rough economy.

“The fact that we got the problems behind us quickly and that we recapped the bank quickly enabled us to go back to lending at a time when a lot of other banks really weren’t doing that. In particular, the old M&I was still struggling all through ‘10 to deal with their problems,” Flynn said. “We got a lot of market share early because we were back in business quickly.”

Milwaukee’s M&I Bank – the only bank headquartered in Wisconsin that was bigger than Associated at the time – was purchased in 2011 by Toronto’s BMO Financial Group and merged into Chicago-based BMO Harris Bank.

Associated’s assets have grown to about $35 billion from less than $24 billion when Flynn came on board as the bank has increased lending in most categories. Honest in self-assessment, Flynn brought up a bad move made along the way.

“We got into the oil and gas business, which turned out to be a big mistake,” Flynn said. “We’ve pretty much wound that down now. So not everything was perfect.”

Associated did some acquisitions, including the purchase of Brown Deer-based Bank Mutual Corp. in 2018, which at the time was one of the largest banks headquartered in Wisconsin.

Associated’s quarterly dividend has increased from a penny per share to 18 cents during Flynn’s tenure, and the share price of Associated has risen to about $18 from $10.

Asked about being a banker in the Midwest compared to California, where he worked three decades for Union Bank, Flynn said slow population growth in Wisconsin limits new lending, but the state also doesn’t see the wild swings that occur in the real estate market.

“You avoid some of the impact you might get in your consumer-oriented portfolios because home prices tend to be more stable. What you don’t get is a lot of organic growth in the economy,” Flynn said. “We have a relatively slow-growing economy compared to the South or the coasts. And a lot of that is because our population doesn’t grow. You get some stability, but you don’t get natural organic growth, so it’s a very competitive market for banks.”

Flynn said that, at least for the next couple of years, low interest rates will be the biggest challenge for the banking industry.

“That’s the big struggle. The Fed has made it pretty clear they’re going to be very accommodative for the medium term,” Flynn said. “And that just means that the net interest margin for banks has been pushed down quite a bit.”

He said low interest rates have prompted banks to cut expenses wherever they can.

“You see a lot of banks really driving toward trying to get more efficient because there’s nothing we can do about that fact that LIBOR is near zero,” he said.

Flynn added he has grown fond of Wisconsin and has many good friendships here. In retirement, he plans to remain very involved with nonprofit organization boards on which he serves.

“I’m currently the vice chair of the board of the Medical College of Wisconsin and will become the board chair – I’m on the next rotation,” Flynn said. “That’s actually something that takes up a significant amount of time. I’m on the board of St. Norbert College. I’m not really thinking I’m going to work for another company. You never know. But that’s not in my plans right now.”

He and his wife, Lois, do expect to spend more time in California.

“We have a house we recently bought in Santa Barbara, which we’re remodeling,” Flynn said. “So we’ll spend more time there, particularly when it’s one degree outside. We’re not moving out of Wisconsin.”

When Flynn was hired for the job back in 2009, analysts and some investors wondered how long a California guy would stay in Green Bay.

He said in his very first conversations with the Associated board in 2009, he asked what they wanted him to accomplish.

“That answer would be the same they would give you today. They view having a large bank headquartered in Wisconsin as being very important, and they want to maintain the independence of Associated,” Flynn said.

That has made Associated a good fit for Flynn.

“This is only the second place I’ve worked in 42 years,” he said. “I’ve always intended on being here for the long haul – getting through the crisis and fixing the things that needed to be fixed, but then growing the company from there.”